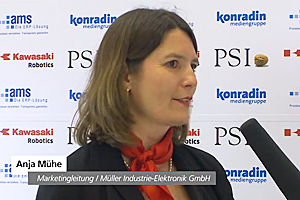 With a successful balance Hannover fair has come to an end on the 12th of April, 2013. This year 6,550 exhibitors from 62 countries had presented themselves on the worldwide most important industrial exhibition in Hannover. The high expectations of the industry could be not least also fulfilled by the fair subject "Integrated Industry" completely. How the future expectations look for the Müller Industrie-Elektronik GmbH and which product novelties and future technologies


on Hannover fair were introduced by the Müller Industrie-Elektronik GmbH, Matthias Müller, manager of the mmc AG, during the following interview explains to you:  http://youtu.be/b6FdIKWOdDo

products "Made in Germany"